I always enjoy hearing from my research clients about their projects–especially if they are using historic documentation to restore or interpret their property.

Ford Reiche has been keeping me up to date on his restoration of Halfway Rock Lighthouse in Maine. He recently sent me these three images relating to the keepers who were assigned to Halfway Rock in the 1930s.

I was delighted with his interpretation of what he discovered in the process of restoring the tower:

The crew at Halfway Rock had a long and frustrating effort to get funds appropriated for a refrigerator. From the date of construction in 1871 until 1937, they had no ice or refrigeration. Some other lighthouses had been provided with refrigerators earlier, but it was pretty much restricted to those stations with families present. Because of the inherent dangers at Halfway Rock, it was limited to men only..called a “stag lighthouse”.  Also they did not get electricity there until 1936. When the day came that they finally got a refrigerator, in 1937, the crew made room for it by removing shelves in their little galley pantry so they could slide the refrigerator in there. In the process, Wm Clark and Arthur Strout signed and dated the back wall of the pantry to mark the occasion.

There was widespread consternation in the lighthouse world when announcement was issued by Washington D.C. that the U.S. Lighthouse Service would be disbanded in 1939 so that the entire system could be folded into the U.S. Coast Guard. Last year when we removed a failing wall in the living quarters that had been built in 1938, we were delighted to find a little joke for us left inside the wall framing by Clark and Strout…the bottle of whiskey that had emptied to ring in the holidays at the end of 1938. As you will see from the photo below, they signed and dated it.  In addition to taking pleasure in breaking several rules about liquor on premises, I have suspected that this was a small sign of their protest about the imminent disruption that they were facing as the U.S. Coast Guard way of life was about to be imposed upon them. 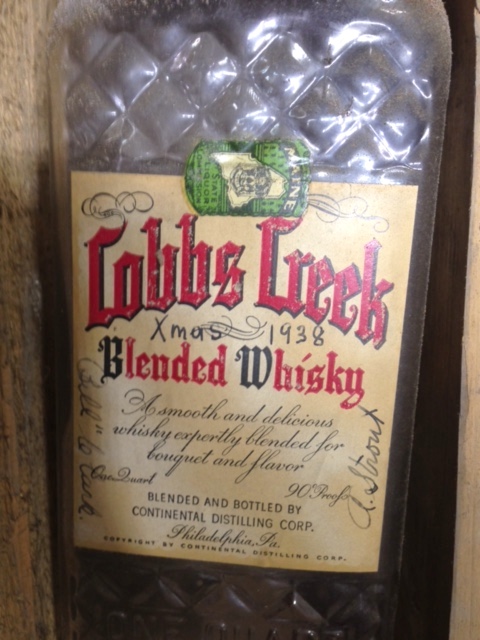