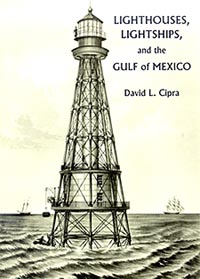 Soon after the Louisiana Purchase, lighthouses were planned and their construction begun along the Gulf Coast to support a burgeoning seaborne commerce. Shifting bars and bayous, soft and muddy bottoms, coral reefs, and periodic hurricanes challenged the skills of the lighthouse designers and builders, as well as the men and women appointed to keep the lights. Over time, because of the numerous natural hazards, often two, sometimes three or even four replacement towers were built at the same station. Lighthouses on the Gulf Coast were challenged, not only by forces of nature, but also by historical events, especially the Civil War. Extinguished as aids to navigation, lighthouses became Confederate lookout posts and Union targets during this period, some were even bombarded. After the war, materials such as cast iron and new technology such as skeletal towers permitted the construction of towers more suited to the Gulf shore’s terrain.

According to U.S. Coast Guard Chief Historian Robert M. Browning, Lighthouses, Lightships, and the Gulf of Mexico is “by far the most complete and well-documented study of Gulf Coast lighthouses and lightships to be published.” Author David L. Cipra presents the history of 80 light stations and 10 lightships along the Gulf coasts of Florida, Alabama, Mississippi, Louisiana, and Texas.

Today, 48 lighthouses are believed to survive along the Gulf. Some of these towers continue as active aids to navigation, although that function is no longer as vital in an age of radio, radar, loran, GPS, and other sophisticated navigational systems. Others serve as centerpieces to parks or historical sites, but all remain as landmarks to their region’s maritime heritage.

David Cipra was well known by most members of the lighthouse community as the foremost expert on Gulf Coast lighthouses. He joined the U.S. Coast Guard in 1966 and retired as Master Chief of Public Affairs in 1986. After retirement, Cipra continued to work for the agency as a civilian. His death ended a 28-year association with the Coast Guard. In 1999, Cipra received special recognition from the Foundation for Coast Guard History for his work, Lighthouses, Lightships, and the Gulf of Mexico, “which adds significantly to the history of lighthouses and aids to navigation.”

Published in 1997, the book is softcover, has 280 pages, 93 illustrations, endnotes, bibliography, and index.

List price: $19.95–order directly from the publisher using online shopping cart or order from below and pay only $12.95 plus shipping.