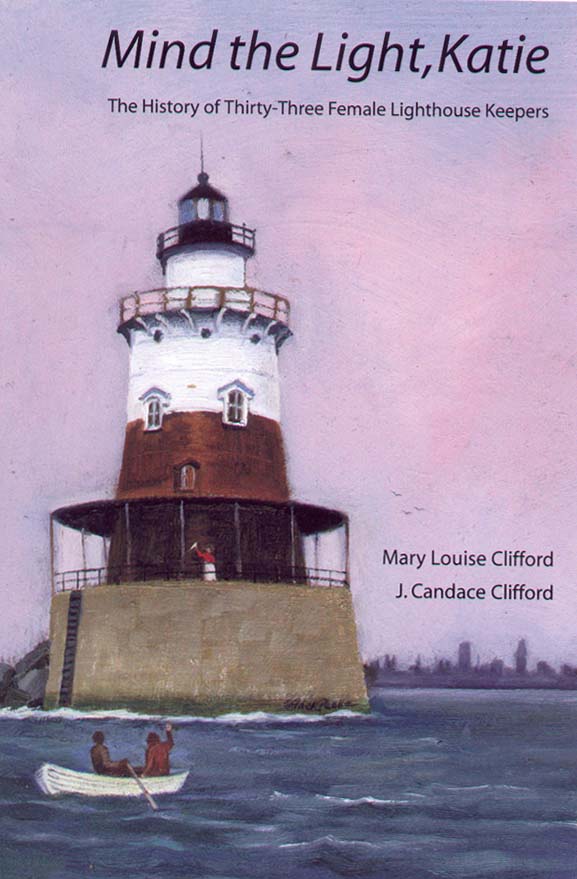 Mary Louise and J. Candace Clifford’s book Women Who Kept the Lights: An Illustrated History of Female Lighthouse Keepers has been so popular that we prepared a condensed version for younger readers–Mind the Light, Katie: The History of Thirty-Three Female lighthouse Keepers. The 144 women who served as principal keeper for more than a year are listed in the longer book. The 33 women presented here are those whose lives were recorded in logs, journals, official correspondence, newspaper articles and obituaries, and recollections by their children and grandchildren.

Kate was 44 years old when her son Jacob rowed his stepfather, John Walker, ill with pneumonia, to Staten Island for medical treatment. John’s last words to his wife were, “Mind the light, Katie.” John, official keeper of the Robbins Reef Lighthouse, never returned. When he died ten days later, a substitute was sent to permit Kate to arrange for his burial and attend his funeral. She was back on the job before the day ended. Although she was paid only a laborer’s wage, Kate faithfully minded the light until she finally received the keeper’s appointment in 1894. Her only communication with the mainland was by rowboat or through the periodic calls of the lighthouse tender bringing supplies. Assisted by her son Jacob, Kate kept the Robbins Reef Light until 1919.

The cover of Mind the Light, Katie has been painted expressly for this book by artist Susie Gach Peelle of Locust Valley, New York, and shows Kate Walker in1890 waving good-bye to her husband and son from the balcony of the Robbins Reef Lighthouse.

Intended for readers, age 12 and up.